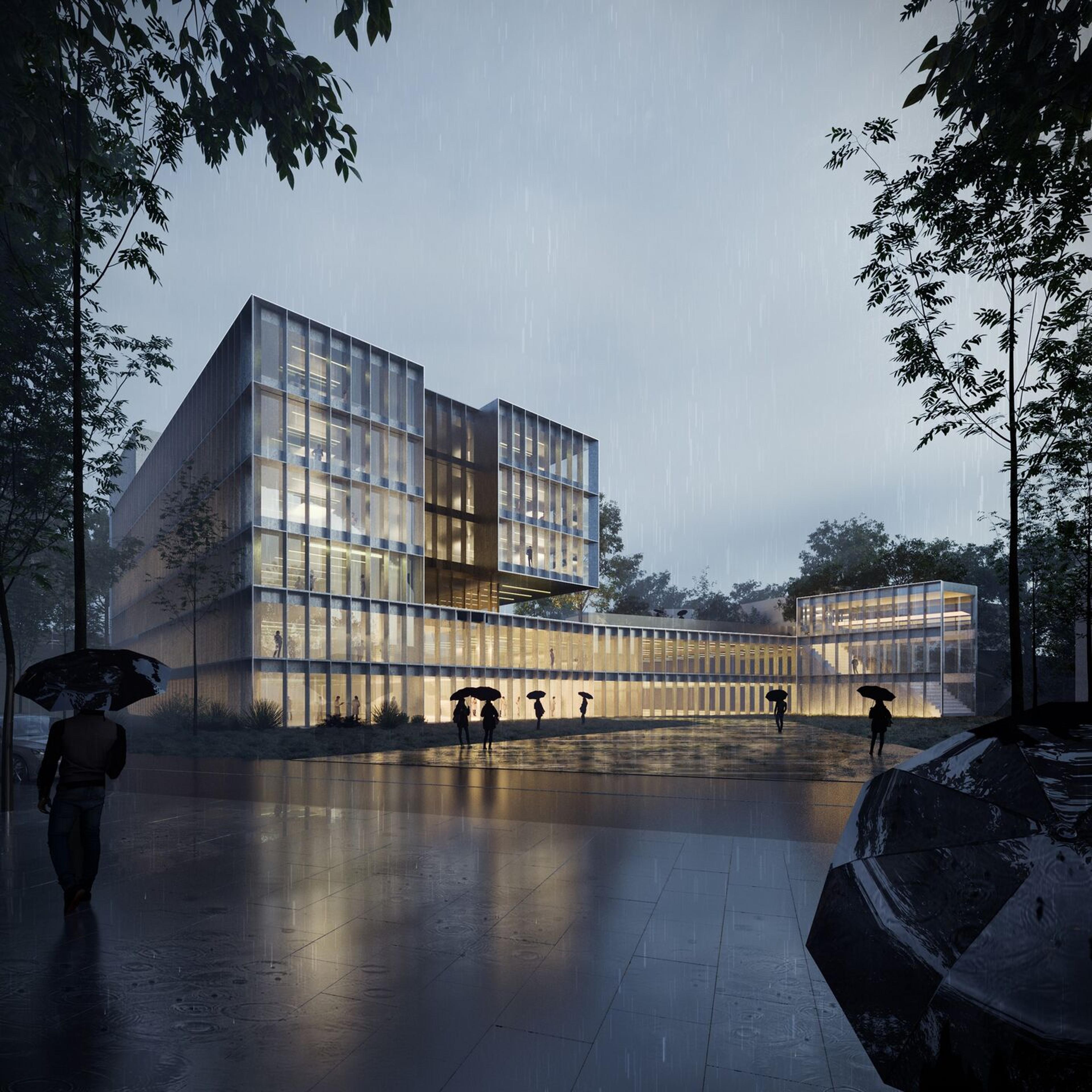 Vaillo+Irigaray Architects, a well-known architecture studio, and BIGSHOTS have been selected to design the new Donostia International Physics Center Foundation building in San Sebastian, Spain. The design brief called for an iconic, singular building that would enhance the existing activities of the DIPC and be easily recognizable. The project includes organizing four existing elements of the site around outdoor spaces, streamlining circulation and connections between the volumes, and striving to harmoniously integrate them.

A NEW LAYOUT THAT PROMOTES ENCOUNTERS

Understanding science as a collective activity and given that the DIPC promotes the constant meeting and interaction between scientists as an essential means for the exchange of ideas and the advancement of knowledge, the new DIPC building promotes the collective and international nature of the centre's activity. To this end, it proposes several strategies:

-ordering the complex around high quality outdoor spaces.
-organising the circulations and connections between the buildings
-harmoniously linking the different buildings.

The new building articulates both platforms, generating a new arrangement in the access to the centre and therefore offering a new institutional image; and on the other hand, it generates a rela-tionship square between the existing buildings, locating the spaces common to all of them: cafeteria, library, assembly hall, etc.

The flexible layout makes it easy to adapt to future remodelling, extensions, changes of users or the evolution of the Centre itself.

The roofs of the new building have a dual function, with differentiated spaces for facilities and as meeting and interaction spaces for the building's occupants. -Priority to spaces for living, strolling and connection with mixed landscaped areas.
-New planting of trees and vegetation.
-Total communication between both levels: +7.5m and +15m.

This new exterior organisation proposes different accesses:
-A main access at elevation +7.5m - Main access and car park.
-A road access at elevation +15m, connected to a service road for the different buildings that have an exit at this elevation.
-Material transport access and access to the laboratories: loading and unloading area for lorries and vehicles directly connected to the exterior and with easy access to the interior of the building via the underground car park.
-Access to bicycles, motorbikes and outdoor parking spaces for visitors.

INTEGRATION OF THE BUILDING INTO ITS SURROUNDINGS

The programme proposed in the competition rules implies an important volumetry in the whole. The organisational logic and functional requirements also determine an emphatic geometry. However, the building has the clear intention of approaching the scale of the existing buildings. To this end, the proposal establishes a strategy capable of distorting the scale of the action in order to achieve an appropriate integration:

-Organising two large horizontal platforms, connecting the different buildings.
-Minimise the geometry of the volume in height.
-Dividing the visual width of the building into 3 parts.
-Forming a plinth capable of generating a "corporate" façade to the DIPC as a whole.
-To make possible new landscaped and vegetated areas as a connection.

BUILDING THAT SHAPES THE NEW DEVELOPMENT

We can say that the new building also shapes the new urbanisation, in such a way that it manages to design the surroundings, becomes the support and containment of the upper square and at the same time provides the accesses and general circulations to the whole plot. This "urbanising" and topographical character of the building allows the whole to be understood from a new organisational and functional logic, giving unity and a new image to the whole complex.

The elements intended to house the plinth, given its peculiar geometry and its greater urban condi-tion, are resolved with the same materials, but according to their own requirements.

The building proposes basic construction systems, derived from its own functionality, but with an undeniable technological approach, seeking an image derived from the use of maintenance-free materials.

The façades are resolved by means of a structural lattice of steel and glass, carpentry and finishes in anodised aluminium: a material of great plasticity, great visual cleanliness and diffuse reflection; very appropriate to the atmosphere of the place and to a programme of physical research.

The geometry resolved by folds, indentations and smaller-scale volumes offers an image that is both institutional and emblematic, integrated into the complex because it is capable of adapting to the topography and the scale of the adjacent buildings.

Winners is an online data base of information related to architectural competitions. We provide a frame and canvas for every project to display its beauty on the screens of thousands of new viewers. We value the work of architects and renderers who break the wall between reality and idea in order to show a hint of the future.